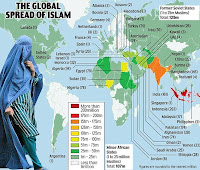 RAMAINYA UMAT ISLAM : RENUNGKAN -How almost one in four people in the world are Muslim... and 1,647,000 live in Britain

There are 1.57billion Muslims around the world, meaning that nearly one in four people practises Islam, according to a report published yesterday.
The size of the Muslim population has long been the subject of guesswork, with estimates ranging anywhere from one billion to 1.8billion.
But the report, by the Pew Research Centre's Forum on Religion and Public Life, is billed as the most comprehensive of its kind.
Enlarge
The project, which has taken three years, presents a portrait of the Muslim world that might surprise some. For example, Germany has more Muslims than Lebanon, China has more than Syria, and Russia has more than Jordan and Libya combined.
One commentator, Amaney Jamal, an assistant professor of politics at Princeton University in the U.S., said: 'This idea that Muslims are Arabs and Arabs are Muslims is obliterated by this report.'
Britain has 1,647,000 Muslims - 2.7 per cent of the UK population, and 0.1 per cent of the global Muslim population, the report said.
Enlarge
This 'weighted' map shows each country's relative size based on its Muslim population
Islam is the world's second largest religion behind Christianity, which has an estimated 2.1billion to 2.2billion followers.
The Pew centre, an American think-tank, calls the report the most thorough on the size and distribution of Muslims.

More...
Zurich gives go-ahead to poster with 'racist image of Islam' ahead of Swiss vote on allowing minarets at mosques
The task of determining the Muslim populations in 232 countries and territories involved analysing census reports, demographic studies and general population surveys.
The report provides further evidence that while the heart of Islam might beat in the Middle East, its greatest numbers lie in Asia - more than 60 per cent of the world's Muslims live in Asia. Indonesia has the world's largest Muslim population - 203million, or 13 per cent of the world's total.
Enlarge
A map compiled by the Pew Forum shows relative sizes of Muslim populations around the world

Global religion: The report showed that nearly one in four people in the world are Muslim
About 20 per cent of Muslims live in the Middle East and North Africa, 15 per cent in Sub-Saharan Africa, 2.4 per cent in Europe and 0.3 per cent in the Americas. Europe is home to about 38million.
The report made no reference to whether the Muslim population is on the increase. A Pew centre project next year will estimate growth rates among Muslim populations and project future trends.
The report also revealed that:
Europe is home to about 38 million Muslims, or about five per cent of its population. Germany appears to have more than 4 million Muslims - almost as many as North and South America combined. In France, where tensions have run high over an influx of Muslim immigrant laborers, the overall numbers were lower but a larger percentage of the population is Muslim.
Two-thirds of all Muslims live in 10 countries. Six are in Asia (Indonesia, Pakistan, India, Bangladesh, Iran and Turkey), three are in North Africa (Egypt, Algeria and Morocco) and one is in sub-Saharan Africa (Nigeria).
Indonesia, which has a tradition of a more tolerant Islam, has the world's largest Muslim population (203 million, or 13 per cent of the world's total). Religious extremists have been involved in several high-profile bombings there in recent years.
In China, the highest concentrations of Muslims were in western provinces. The country experienced its worst outbreak of ethnic violence in decades when rioting broke out this summer between minority Muslim Uighurs and majority Han Chinese.
Of roughly 4.6 million Muslims in the Americas, more than half live in the United States although they only make up 0.8 percent of the population there. About 700,000 people in Canada are Muslim, or about two percent of the total population.Read more: http://www.dailymail.co.uk/news/worldnews/article-1218934/Pew-Forum-Report-Global-Muslim-population-Nearly-in-world-people-practice-Islam--1-647-000-live-Britain.html#ixzz0TS9X56RX
Posted by UST FADH at 5:29 PM No comments: 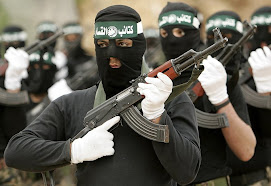